From Modefabriek to Fashion Week: How William Ampofo put his brand CRUÈL on the map

William Ampofo (21) is living his dream. On Saturday 19 September, the young Dutch designer exhibited his burgeoning label CRUÈL for the first time during Amsterdam Fashion Week. What has brought him to this point, and what events were crucial in his career thus far? Modefabriek chatted with the designer following his AFW debut.

The fashion press were out in full force for CRUÈL’s show, held in the building on Amsterdam’s Rokin that was once home to the V&D department store. The deserted, empty space was filled with an army of models, spread over the concrete storey and dressed in black and white. Accompanied by thunderous music, the minimalist choreography had every member of the audience gripped to the show.

This moment is preceded by a long personal journey for Ampofo. Despite a lifelong interest in fashion, he followed well-meaning advice to study law, shooting for a secure future. But soon after starting his course, he realised that he needed to follow his instincts. And that brought him to the Jean School in Amsterdam. ‘I designed my own take on trousers, deviating from the norm. My designs caught the eye of my teachers and the other students, but they thought they were too expressive, and weren’t up for wearing the pieces themselves. I thought it was a shame, because I think people should be able to express themselves in their own way. I wanted to use clothing to spread this message. My mission and vision kept on evolving, gradually resulting in the development of my own collection, and subsequently the birth of CRUÈL’.

A nomination for the FunX Media Business Award was quickly followed by Ampofo’s first show. Completely self-financed and exhibited at De Bajes, a club on Amsterdam’s Rembrandtplein. Second and third shows followed, in Club Air and Skatepark Noord respectively, as well as game-changing collaborations with the Rijksmuseum and exclusive fashion stores such as FOUR Amsterdam. ‘It’s mad how quickly this has all happened. I’m very grateful to all the fans of the label, and very happy that I followed my instincts’.

‘I want to create a unique experience in my shows, which – unlike the clothes – is not for sale’.

The ‘industry’ side of the fashion world

It was through Modefabriek that Ampofo got to know the other side of the fashion industry. He exhibited his new collections at Modefabriek in 2018 and 2019, at the HTNK stand and in the Denim Market, which introduced him to the ‘industry’ side of the fashion world: ‘My network grew massively thanks to this event. I met manufacturers, potential buyers and consultants. It helped me grow closer to the industry, and as a small label, that was vital for me. Following this experience, we decided to focus on sustainability for the first time, and on the best way of integrating it in the company. For one, we started working with a made-to-order concept, so that we never again have to deal with overproduction and unnecessary waste. It was hard to find a producer who was up for it, but we did in the end, and we’re proud it worked out’. 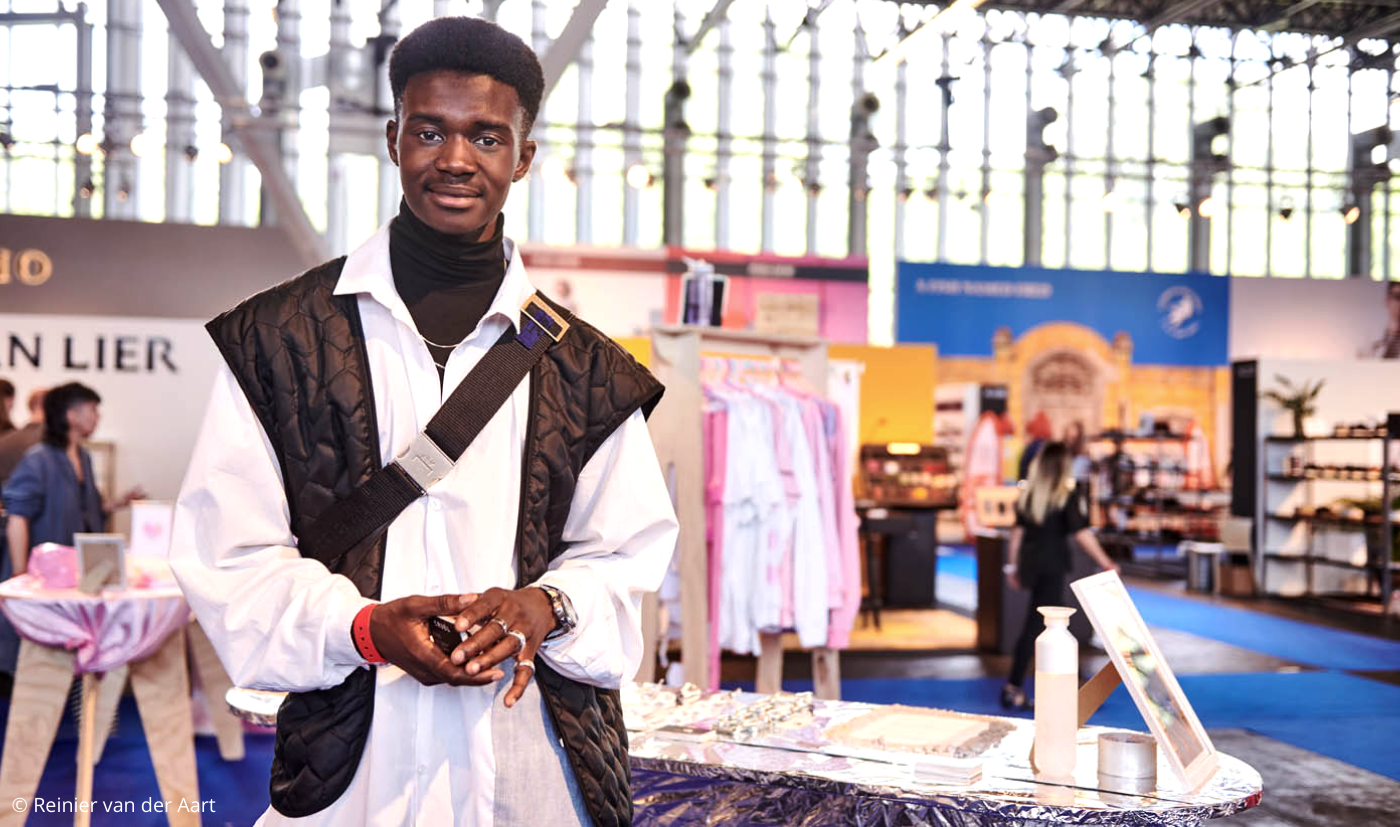 In keeping with the spirit of the age

CRUÈL may be a small label, but Ampofo was still able to put a positive spin on the challenges linked to the coronavirus crisis. ‘We dropped the prices of our clothing, as a way of helping out in challenging times, and to give people the feeling of still being able to wear decent clothes for a decent price. I wanted to make it possible for them to remain part of our community in a more difficult period’. The label therefore held up through testing times, and the designer never stopped sharing his vision.

For example, Ampofo created a design that carried his vision and proved to be completely in keeping with the spirit of the age. ‘I wanted to make a shirt with the text ‘Stop telling black children with great intellect that they acting white’. It’s something I often heard when I was younger, like ‘You shouldn’t behave like that, you’re black’. By chance, we made this T-shirt just before Black Lives Matter blew up. While it’s a powerful statement, that wasn’t my intention. It was just a visualisation of how I feel – and apparently of how a lot of other people feel, too’.

The message of change was also visible in CRUÈL’s Amsterdam Fashion Week debut. ‘It was very special to be there, because I have come from so far. I wanted to create the same unique experience, which – unlike the clothes – is not for sale’. “CRUÈL” means brutal, in the sense of daring to express yourself, grabbing your chances and not being held back by what other people think. I’m ultimately not bothered about the money or the publicity; I want our designs to empower people. Our clothes need to help people on their quest towards realising their personal goals’.