Recycling is hot and happening! It’s becoming increasingly common for already made ‘things’ to be given a new lease of life, and the trend is also thriving in fashion. And not only the fashion itself, the places where we shop are also often enjoying a revival. In the spotlights this week: shopping malls in ‘recycled’ architecture. 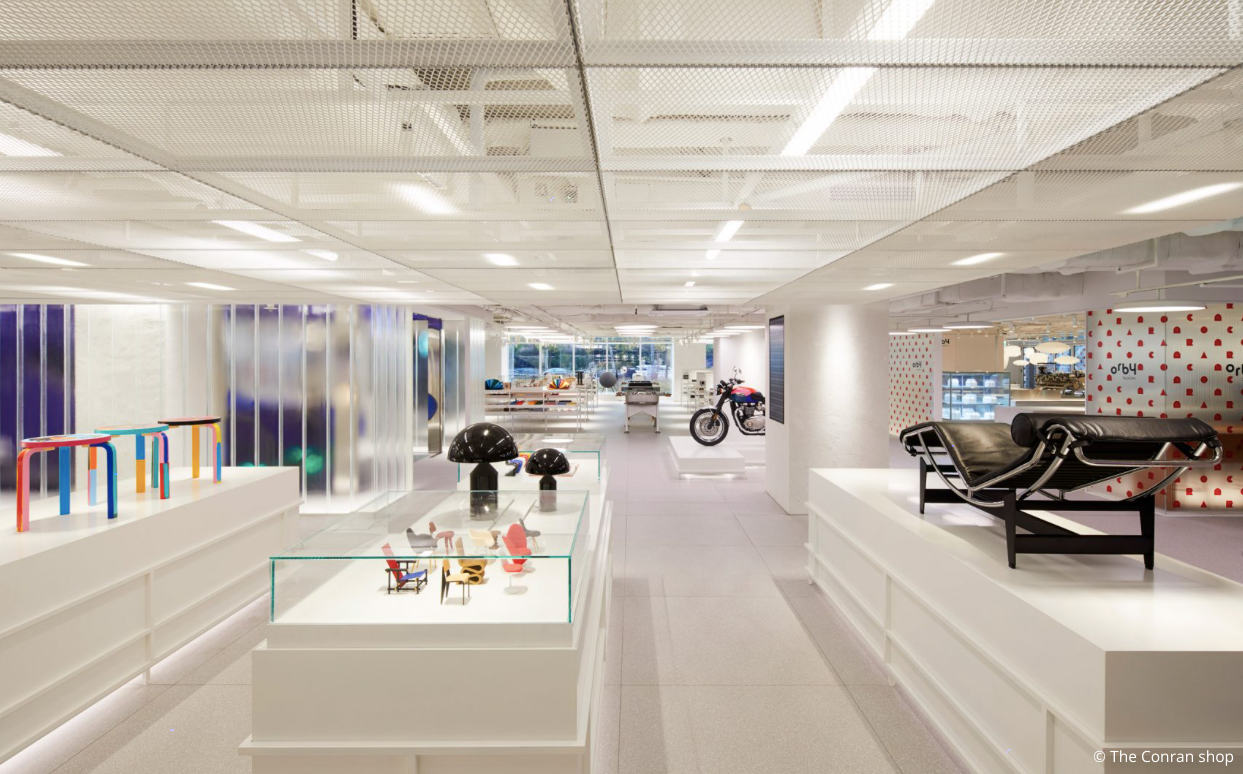 From car park to retail hotspot

Ease, design, price or sustainability: there are all sorts of reasons for repurposing a building. In this unique case, it was of primary importance that the resulting design was dazzling, practical and technically impressive. This summer, The Conran Shop opened a 24,000 m2 retail Valhalla in a former car park in Seoul. It became a two-storey shopping universe; independent, but handily ‘parked’ right alongside the hugely popular Gangnam’s Lotte Department Store. The chain’s twelfth store needed to be more than simply the next in a line of outlets, it had to be ‘the best design store in the world’, in the words of Conran’s Creative Director Stephen Briars. The area in which the mall opened is modern and prosperous, the perfect match for the store’s – equally modern and prosperous – shoppers. 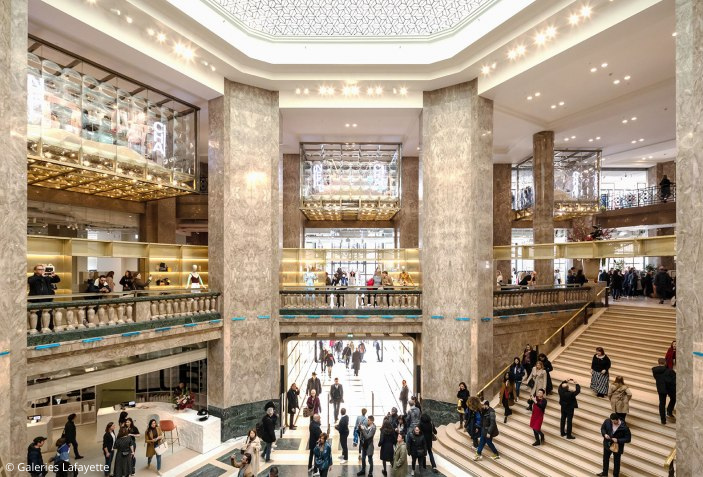 Closer to home, the world-famous Parisian Galeries Lafayette recently moved into a 1930s art deco former bank. Architect Bjarke Ingels transformed the historical building on the Champs-Élysées in Paris into a ‘retail lab’. Not only does this new flagship store cater to high-echelon shopping, the hybrid retail heaven is also an enticing location for fashion shows, brand events and other fashion-related activities. Ingels opted for this set-up to offer – precisely now that everything’s digital – a space that visually and physically stimulates the senses: an urban oasis with large, open spaces, elements of marble and gold, and challenging glass walls that invite you to briefly take leave of the here and now, and to contemplate both the days of yore and the future. 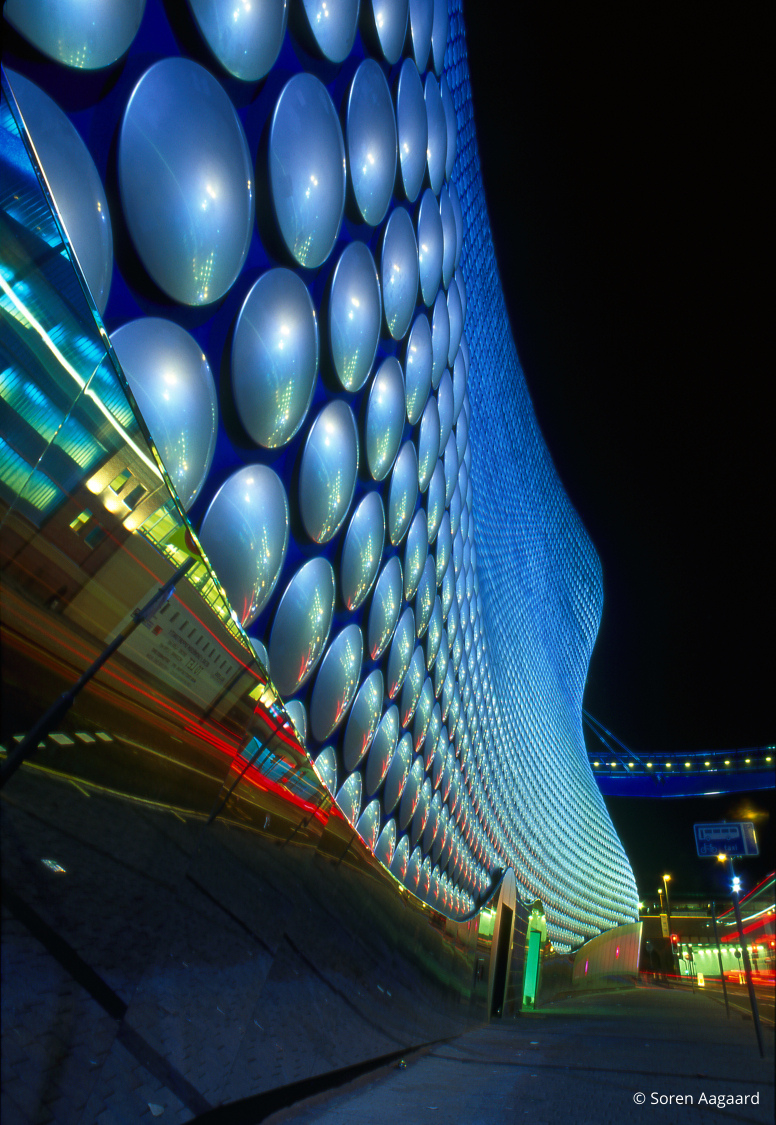 Green shopping in a former arena

Not as new, but certainly no less impressive is England’s largest shopping centre: Bullring & Grand Central. The location has always been associated with trade, even as Birmingham’s major market in the Middle Ages, but takes its name from the iron ring to which bulls were chained before they entered the arena. The mall thankfully no longer has anything to do with such cruel animal practices. On the contrary. Nowadays, the Bullring feels strongly about sustainability. A range of sustainable concepts, as well as all stores located in the shopping centre, are part of efforts to achieve the aim of being Net Positive by 2030. This means that they give back everything they use, thereby reducing their economic, social and environmental impact to zero. Efforts are made to reduce energy usage, and wherever possible, tap water is replaced by rainwater. A whopping 97% of waste was recycled in 2019, and this is now being extended to include coffee cups. The Bullring is involved with experiments, innovations and discussions with more than 250 partners, working towards the optimal green retail experience. Without doubt, a giant leap in the right direction, and an inspiration to many!

"Precisely now that almost everything’s digital, it’s vital to create a space that visually – and even physically – stimulates the senses."

Stary Browar, or 'Old Brewery’, is the final shining star in this selection of striking malls located in buildings with alternative beginnings. At this characteristic spot in Poznan, Poland, home to a beer brewery with 19th-century roots, beer still flows from the kegs. The traditional brewery architecture has been retained, and it is now the remarkable backdrop for the retail space come art gallery, forming a funky mix with the other forms of recreation on offer. Nearly 200 stores, dozens of fine dining & drinking locations, eight cinemas, a hotel, a club, an event and exposition space and a park blend into a mini city, in historical surroundings with an urban feel. For more than two decades and counting, Stary Browar has been attracting fashionistas, art fanatics and those looking for culinary and entertainment fulfilment.

Recycling may sometimes seem overly modern or time-specifically trendy, but it is clear that clever visionaries – like the architects of the projects outlined above – have seen existing structures in a different light for a good while. We look forward expectantly to more green, inventive ideas for how ‘old’ can redress itself as ‘new’.

Retail 22/12/2020
The digitisation of retail: how is Generation Z shaping future shopping behaviour?
Retail 06/08/2020
The state of the fashion industry during the coronavirus crisis #1
Retail 20/08/2020
Openness and transparency in the fashion world: 'Translucent facades & see-through shopping'